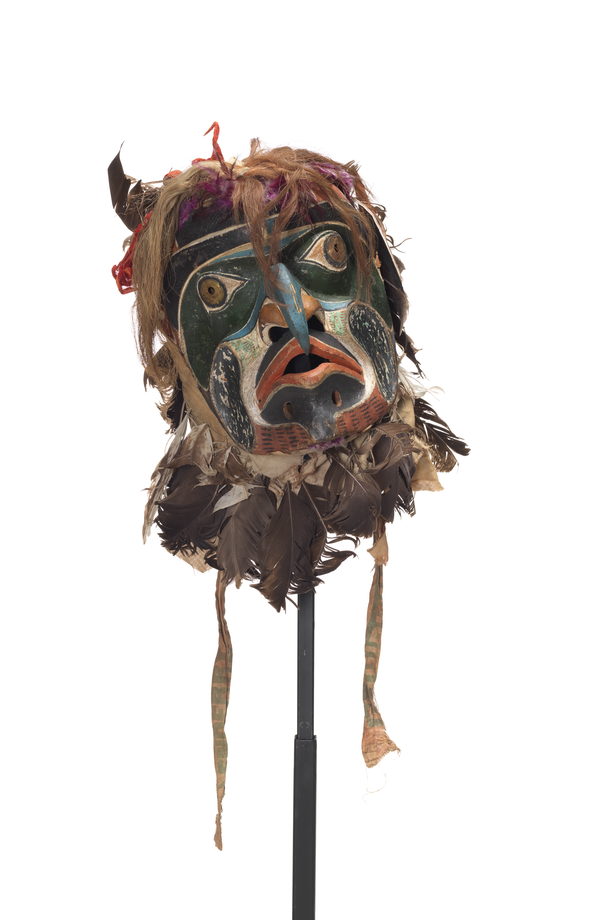 Wild-Man of the Woods

The Bak´was is a diminutive, but authoritative character about half the size of a grown man. He has a hooked nose that curves to touch the upper lip of a usually open mouth and a hairy, green body. His name translates into, “man-of-the-ground embodiment” in English. Bak´was, who lives in the country of ghosts, is the Chief of the woodsmen and keeper of drowned souls. If an individual is lost in the woods, or while traveling in a canoe, and happens to come upon a Bak´was, the creature will offer what appears to be dried salmon, but is actually rotten wood, maggots, snakes or lizards. If this offering is eaten, the person immediately turns into a ghost and becomes a member of the Bak´was entourage forever. Bak´was sometimes leaves the dark forest and travels to isolated beaches where he digs for another of his favourite foods, dzoli or cockles. Bak´was is sometimes called, “The Cockle Hunter” or “Chief of the Ghosts” or “Hunter of the Night.” Because Bak´was is a shy creature and in one sense afraid of humans, the performer often holds his forearm up to hide his masked face from observers. Bak´was can appear in both the T´seka and Tła’sala. The first mentioned is higher in rank. The dancer appears wearing a mask representing this supernatural being and a hair-covered costume along with hemlock bark rings, wrist and ankle bands acknowledging the forest as the dwelling place of the Bak´was.

Duncan Campbell Scott, the Canadian Superintendent General of Indian Affairs from 1913 to 1932, played a major role in the systemic destruction of First Nations’ cultures. It is ironic that the man who championed the anti-potlatch legislation that led to the removal of sacred Kwakwaka’wakw potlatch regalia from its community of origin kept this confiscated Bak´was mask in his office for his own enjoyment.

Bak´was mask carved from red cedar. The head is one piece and the two horns are carved separately, nailed to each side. The mask appears to have been under-painted with white paint. The forehead is black with red split U forms rising above each black eyebrow. Both extremes of the forehead are painted red. Small, upward pointed ears painted red with some white are attached at eyebrow level. The deeply carved eye sockets are painted dark green. The mask features a black outer eyelid line, and a carved inner line painted white. The eyes are black circles upon which a smaller brass disc has been nailed with four brass brads (small finishing nails). The centre of the brass discs has been drilled through as is the underlying wood to facilitate the wearer’s vision. Flakes of mica have been mixed into the paint of the eye socket. The mask has a large hooked nose painted teal blue which recurves over the upper lip into an open mouth. To the top of the head bunches of small feathers which have been dyed magenta are nailed. Attached in the centre are bunches of long cow or horse hair with the skin attached. These are nailed on top of a piece of hide which has lost all its hair or fur. A harness of bent twigs is nailed to the back of the mask. A large piece of white cloth is nailed to the perimeter of the mask and fits closely over the harness. Sewn on this fabric on the back and under the chin are rows of brown feathers. Tied to the top of the harness, through the cloth, is a strip of red fabric to which is tied a twig and a bundle of shredded cedar bark. The inside of the harness is padded with a thick piece of blanket material. There is an upside-down frog depicted on the lower lip. Black, green, white, red, blue, brown, magenta.