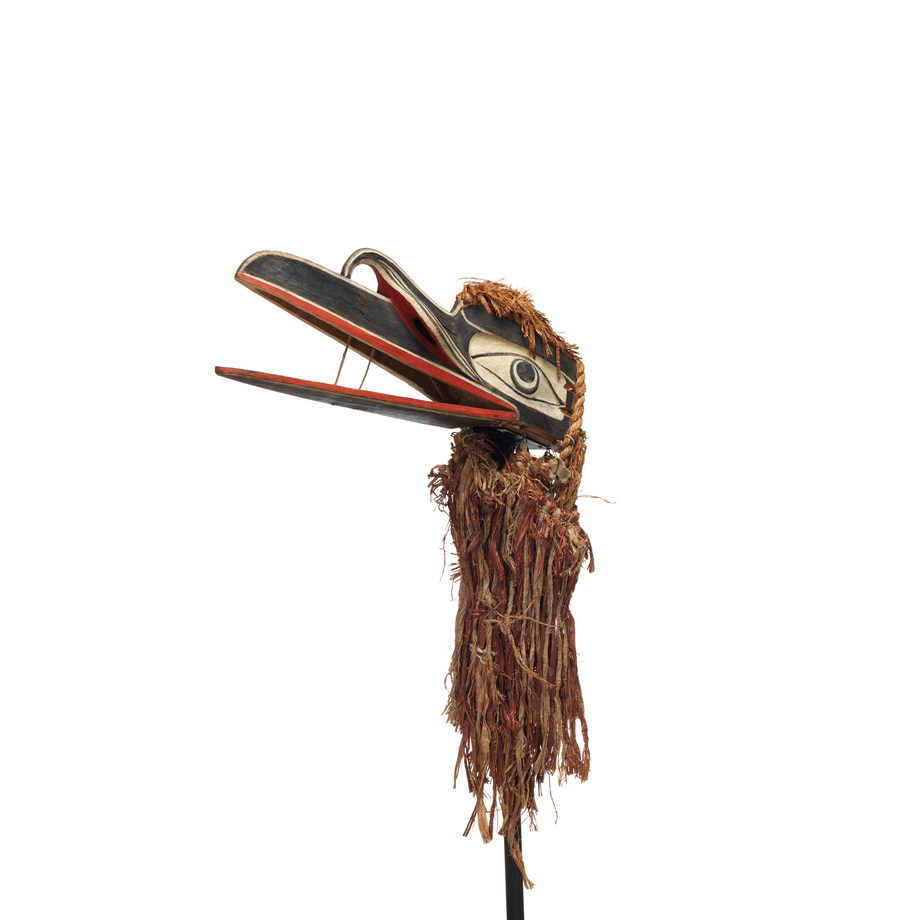 The mystical Raven is one of the bird-servants to Man-Eater-at-the-North-End-of-the-World. Their role was to kill people and bring this food to their master. When the Cannibal-Dancer hears the name of this raven, he goes into a frenzy and begins to run wild.

The hamsamala (or dance of the Hamat´sa masks) is the third part of the Hamat´sa ritual and is a very spectacular and serious event. Supernatural Man-eating birds — the most important of which are the Gwaxgwakwalanuksiwe’ “Raven at the north end of the world”, Huxhugwaxtawe’ “Huxwhukw of heaven”, and Galugada’yi, “Crooked Beak of Heaven” are the assistants and brothers of the cannibal spirit. They appear during this portion of the ritual. Cannibal birds are among the most dramatic and numerous of all Kwakwaka’wakw masks. These masks must conform to certain strict elements of form and must be trimmed with shredded cedar bark. One can be distinguished from the other by the individual characteristic of the beak and by each bird’s particular cry. The beak is hinged so that the jaw can be snapped close with a string pulled by the dancer from under the cedar bark trim. A harness, tied around the dancer’s chest, supports the mask. Their long beaks are used to crack open men’s skulls and eat their brains or pluck the eyeballs out. The cannibal birds emerge one at a time. After first dancing upright, the dancer then squats and jumps back and forth in front of the fire. Then sitting on the ground, he swings the beak close to the floor and lifts it in long sweeping motions, snapping the beak rapidly and shouting the dramatic cry of that particular cannibal bird. After he rises and dances to the next station on the floor, another bird emerges and they dance facing each other across the fire, snapping their beaks and repeating the original steps of the first cannibal bird. Four dancers can participate at a time.

Bird mask carved of wood, rather crudely painted. Red elements are vermilion. Beak has an under-cut nostril, painted vermilion. A sweeping curve is carved above the nostril over the straight beak. Some repair evident- metal strips on either side of black nostrils are tacked on and painted over with black. Stopper on beak is braided twine. Black, white, red.