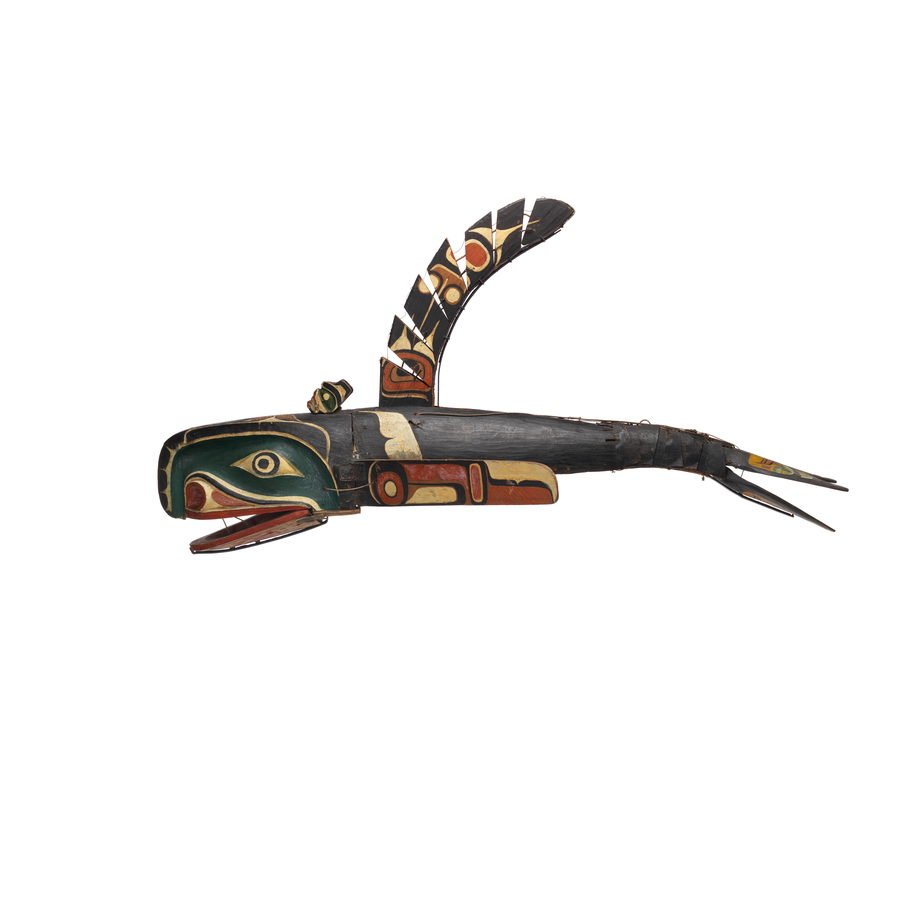 Killer whales abound in the waters of the Kwakwaka’wakw. They are most impressive when seen from a canoe and are a forceful element within Kwakwaka’wakw mythology and art. The Kwak´wala word for killer whale, maxinuxw, means “side by side tribe” which refers to the way in which killer whales travel together in groups. Killer whale masks usually appear in the Tła’sala Peace Dances as a treasure, but they can also appear in the T´seka Red Cedar Bark Dances. The dancer moves slowly around the dance floor diving, breaching and imitating the actions of a killer whale. This killer whale mask features a face blowhole and the tip of the tail has a face design on both sides. The mask is comprised of 18 pieces of wood, mostly articulated. When the string is pulled, the fin is erected and pieced together.

Chief Udzistalis, Henry Speck told George Hunt that the, “Kwakwaka’wakw believe that killer whales live in a great house, a four-day journey out towards the open sea. Killer whale is an important Chief in the undersea world. This powerful being uses porpoises and sea lions as servants and messengers. People who are lucky enough to see its house will receive supernatural power and the right to use the killer whale as their crest. They will also receive the privilege of using the killer whale’s songs and dances.".

Killer whale dance mask constructed of 18 pieces of wood. The jaw of the whale is articulated and attached to the head with leather hinges. The head of the whale attaches to the body of the whale with metal strips, which are nailed. There is a small mask sitting where the blow hole would be located. The fins are articulated and are also attached to the body with leather hinges. The dorsal fin is hinged in six separate places; it is raised and folded down by means of strings. The tail fluke is attached with leather and ten strips of tin to give it movement in all directions. The tip of the tail is constructed from two separate, flat, pieces of wood and can be clapped together by pulling on the ropes. Each side of this double tail has an anthropomorphic face design on both the interior and exterior. The mask is fully articulated and painted black, green, red and white.