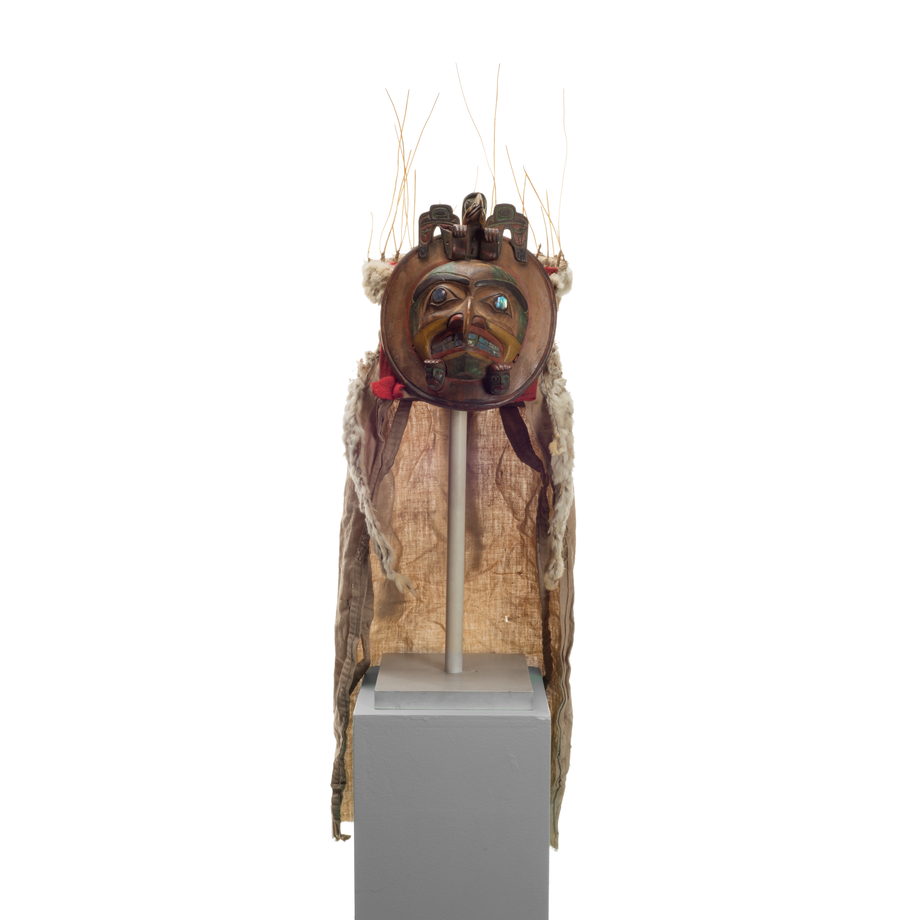 This frontlet is an example of outstanding artistry. It was originally owned by ‘Namgis Chief Sam Scow whose grand-daughter works at U’mista. It was also owned by André Breton known as the “Father of Surrealism” who kept it in his library. We thank the Bretons for returning this treasure home to its family.

Circular frontlet mounted on a headdress. The central face is that of a bird that has a human-style mouth and nostrils with a hooked beak-like nose. The beak is yellow and supports the belief that it is an Eagle transforming into a human. This main figure also has human-like hands that have human faces in each palm. The bird perched on the top appears to have all the characteristics of a raven, however, the beak is yellow. This makes it unclear as to the type of bird, unless the frontlet was repainted in later years and the original color of the small bird’s beak was adjusted.

In most northern style frontlets where the Dłuwalaxa “Returned from Heaven Dances” originated, the frontlets worn usually depict supernatural beings and their transformation into the first ancestors of the various noble families. This is shown in the central creature’s human-like qualities in the mouth and nose as well as the hands with human faces. Birds are a typical theme for frontlet carvings, for they have the ability to fly and are connected to the heavens, where this society’s members are abducted and taken for lengthy periods of time and returned to our world with gifts of supernatural power and the ability to transform into various beings and animals.

The main figure has many characteristics of a famous Hiłdzakw crest belonging to Chief Wikwiłba Wakas “Eagle Beak-Nose Great River”, one of the great Hiłdzakw Lead Hereditary Chiefs from Bella Bella. Many marriages were arranged by the Kwakwaka’wakw to the Hiłdzakw in order to obtain prestigious ceremonial rights owned by the latter. There are many frontlets owned and collected amongst the Kwakwaka’wakw baring this powerful Eagle Beak-Nose crest. This frontlet could very well be a southern version of an older frontlet that had been transferred to the Kwakwaka’wakw from the Hiłdzakw.

The small bird on top of the frontlet appears to be a raven, but the yellow beak does not support the realistic characteristics of a raven. This is unusual for Kwakwaka’wakw carvers of earlier times who were particular about the life-like characteristics of the crests that they were carving and made the characters of their work easy to distinguish. However, certain parts of the frontlet appear to have been repainted and the beak of the “raven” could have been repainted by another artist using their artistic license with a brighter color to make it stand out.