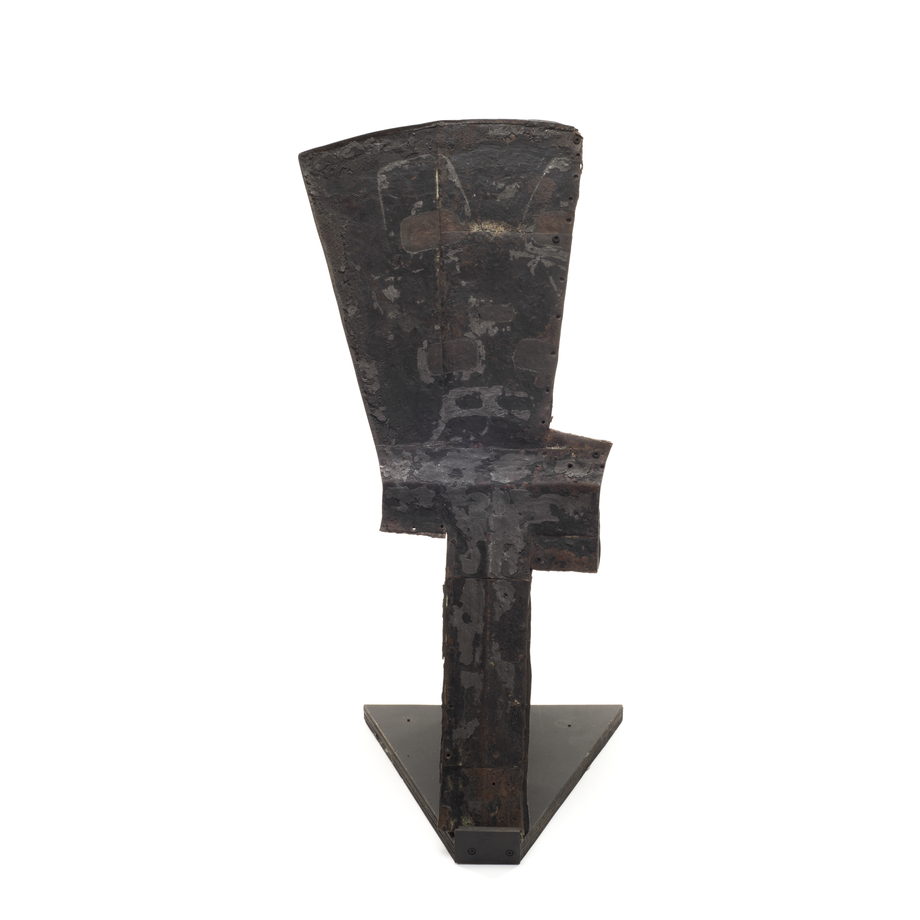 T´łakwa Copper named Angwala - Cloudy - which belonged to K´wamx’udi Charlie Walkus who was half Awik'inuxw from Rivers Inlet and ‘Namgis from Alert Bay. Around 1864-65 a man from Fort Rupert named Hamidagame’ bought the copper in Victoria from a Northern Native for 50 blankets. By the time K´wamx’udi purchased the copper it was valued at 245 blankets and it was in his possession when it was confiscated in Alert Bay in 1922. The copper is made from numerous pieces of copper sheeting riveted together. In some places, such as the vertical line of the “T” or backbone, two layers of metal are riveted together which is unusual. The copper’s face, compared to the others in the collection, is flat and not domed. Although the “T” is also shallow, it is well defined. Uneven or low areas of the metal have been filled with a thick black paint. The copper is painted with several layers of black and grey paint. A crest design and the T-shape have been painted over with a grey paint or what could be a low quality graphite or silver paint that may have been used to imitate graphite. The face design has five ovoids etched into it with two “U” shapes extending over the top two ovoids. Below the two bottom ovoids is a facing downward “U” shape with a split “U” fine-lined inside. The design does not seem to be any distinct form line, nor does it create any distinct design, but possibly it is etched and painted to give it some decorative value. Parts of the upper and lower sections have been cut off indicating that it was a copper of some value worth “breaking”. There are many holes that are remnants of riveting to add pieces where parts of the original copper were chiseled away and then put back together. Angwala must have had additional history that went further than what George Hunt had documented. Black, grey, copper.