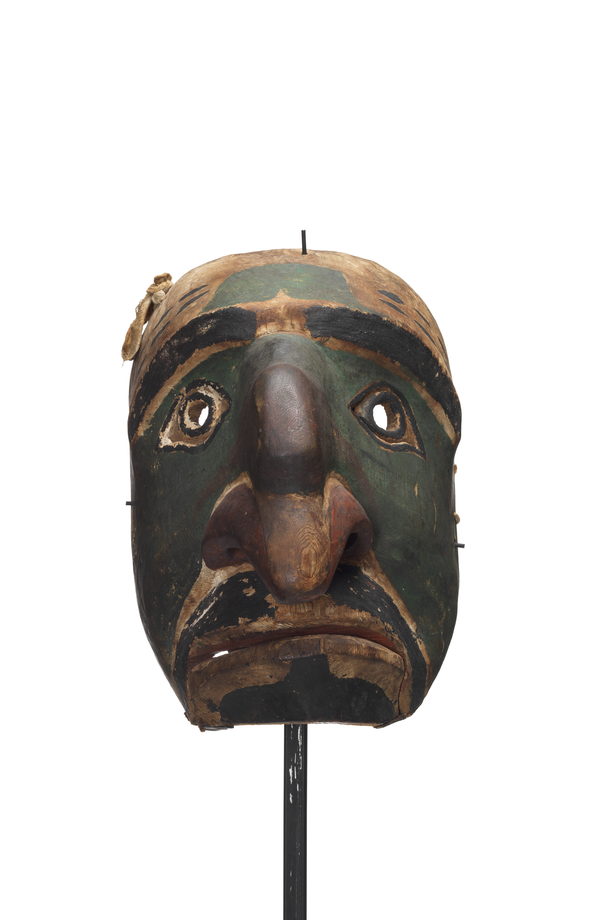 Nułamał or Fool Dancers are messengers and assistants to the Hamat´sa, helping enforce the laws and proper etiquette of the Winter Ceremonies. They occupy stations near the doorway of the bighouse, watching for any transgression and prevent guests from leaving. They may brandish metre-long clubs or even axes in this role and have been known to beat offenders rather severely. The distinguishing feature of the Nułamał mask is the exaggerated nose from which it is said that mucus constantly flows. Audiences have been known to taunt a member of the Nułamał Society. The dancer would become excited if any person touched his nose or made fun of it. The Nułamał does not dance, but when excited, runs about like a madman, throwing stones, knocking people down and making his cry, which is, “Wi! Wi! Wi!”

Owned by Joseph Speck until its forced surrender to Indian Agent William Halliday on March 25, 1922. Halliday later displayed and photographed the seized pieces at the Parish Hall in Alert Bay. After doing an inventory, he crated the items in June, and at the end of September he shipped them to Edward Sapir at the National Museum of Man (now the Canadian Museum of History). They remained the property of the NMM until their repatriation by the U’mista and Nuyumbalees Cultural Societies in 1979.

Carved and painted face mask. Most of its surface is painted green, with the forehead left unpainted, except for a central green inverted split U form extending from above the bridge of the nose. The forehead also displays a black dashing above the eyebrows, on either side of the split ‘U’. The eyelid line is painted black, with a carved inner line. The circle of iris is painted black and the pupil is drilled through to allow the dancer to see. The eye socket is painted green, but not carved in relief, with the paint extending to the bottom of the jaws. The exaggerated nose presents an additional projection near the bridge of the nose. The exaggerated nostrils are painted red. Goatee and moustache are painted black. The lower jaw is articulated.