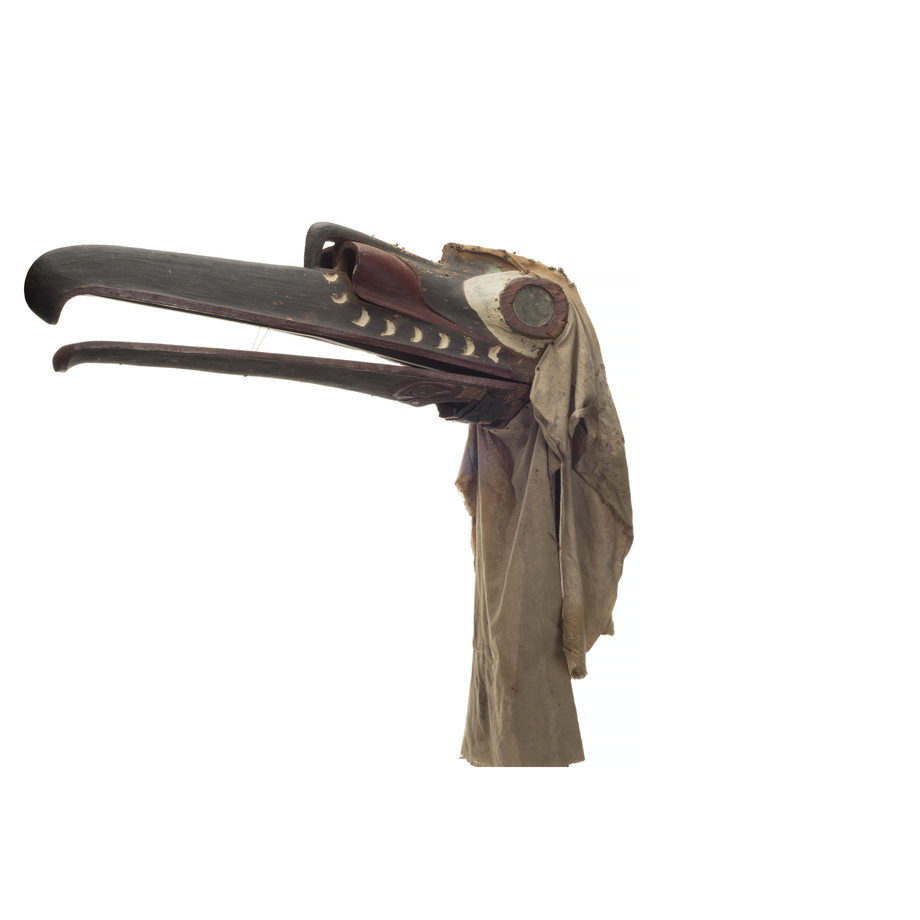 K´enk´u is a supernatural crane-like bird that is often mistaken as a Huxwhukw. Both birds have long narrow beaks and feed on human brains. Although similar, both birds are unique within potlatch ceremonies. The right to display the K´enk´u mask, song and dance is a special privilege and masks of this kind are rare.

The K´enk´u is a rare supernatural bird that comes from the heavens and is a rare species of Huxwhukw - Supernatural Crane-Like Bird. It has a long narrow black beak with a rounded beak-tip, elaborately flared nostrils with a narrow bridge on top, large round eyes often inset with mirrors, a large head covered with fluffy white plumage and occasionally decorated with dangling carved skulls or human heads. K´enk´u is crane-like in appearance and often mistaken for a Huxwhukw. K´enk´u has a ceremony of its own and is not connected to the Hamat´sa society; it appears later in the T´seka “Red Cedar Bark Dances”. The behavior of this bird is similar to that of the Huxwhukw as it also splits the skulls of its victims and eats the exposed brains. K´enk´u, with their long black beaks which often have slender lips that are painted red, signify its desire to eat human flesh and blood. Their flared nostrils also represent wildness and a frenzied-like state that creatures such as K´enk´u and many others in Kwakwaka’wakw culture enter when eating humans.

The mirrored eyes add to the drama of this mask’s appearance in the Big House. The underside of the lower jaw has a human face with a wide carved open mouth that allows for a large possible sight hole for the dancer as well as an exit for the sound of a special whistle that imitates the sound of this bird. The articulated lower jaw is loosely tied together and had a string to manipulate the beak and cause it to open and snap shut. The original colors used on this mask are mainly black and red and appear to be natural pigment paint, the black may be mixed with graphite; the red on the outside of the lips is repainted and along with the added white, commercial paints. The red and especially the white seem to have been added later as most early masks were repainted to brighten them and make them easier to see in the fire-lit Big Houses of old.

The head part of the mask has many nails slightly sticking out that indicate it originally had some feathered skins attached. K´enk´u masks in other collections show that the birds normally have plumage on their heads, often white or light brown. This mask has an old cotton cloth to conceal the head of the dancer and was probably added in haste to use the mask after the original feathers fell off. The white cloth has one white feather fragment still attached and indicates that the cloth did have feathers sewn onto it at one time.