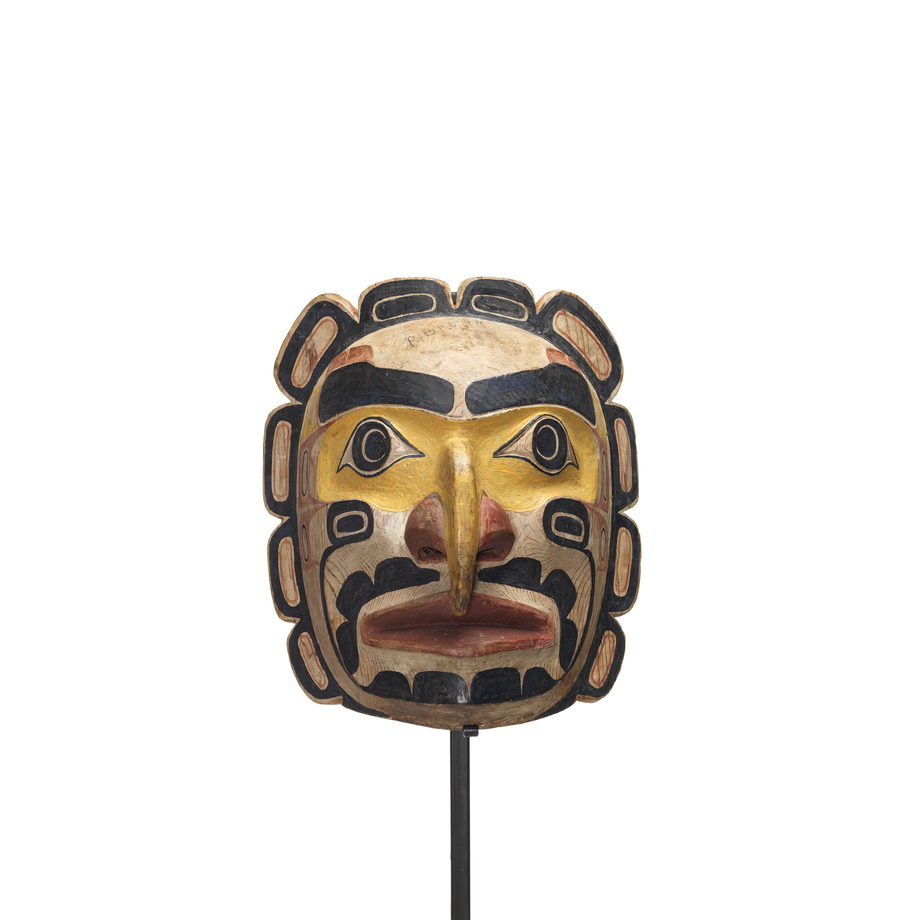 The Sun is believed to be a man who came to earth from the heavens and became the first ancestor to a number of Kwakwaka’wakw clans. These people use the sun and his mask as their crest. One legend says the Sun wears abalone-shell earrings and when he walks across the sky, his abalone-shell earrings catch the light and give daylight to the world.

The sun is the ancestor and crest of a number of Kwakwaka’wakw. The sun lives in the upper world (or the sky) and “walks across the heavens” daily from east to west. As a family crest, the image of the sun is often seen on totem poles—in the early days in front of houses in Alert Bay or today on top of the world's tallest totem pole, which is also located in Alert Bay. Sun dancers use a blanket covered in iridescent abalone shells to suggest the movements of the sun traveling from east to west. This sun mask was carved in typical Kwakwaka’wakw manner, as an anthropomorphic face with a hooked nose. Ten short, scalloped rays emanate from the sides and top of the mask. (Macnair, Peter L., Alan L. Hoover, and Kevin Neary (1980) The Legacy: Continuing Traditions of Canadian Northwest Coast Indian Art. Victoria: British Columbia Provincial Museum. P 165).

Humanoid sun mask, carved from one piece of red cedar. The only holes are the two nostrils. Some iron staples, one with a strip of cotton fabric attached, seem to relate to an earlier attachment, now lost. The carving is painted overall in white, black, red and yellow. The wood rings are visible below the whitewash. Eye sockets and hooked nose are painted yellow. The face is circled with ten scallops, each painted with a black U form enclosing a white ovoid (except the two top ones, which contain a black ovoid). There is also some painting in black and red on the back of the scallops.