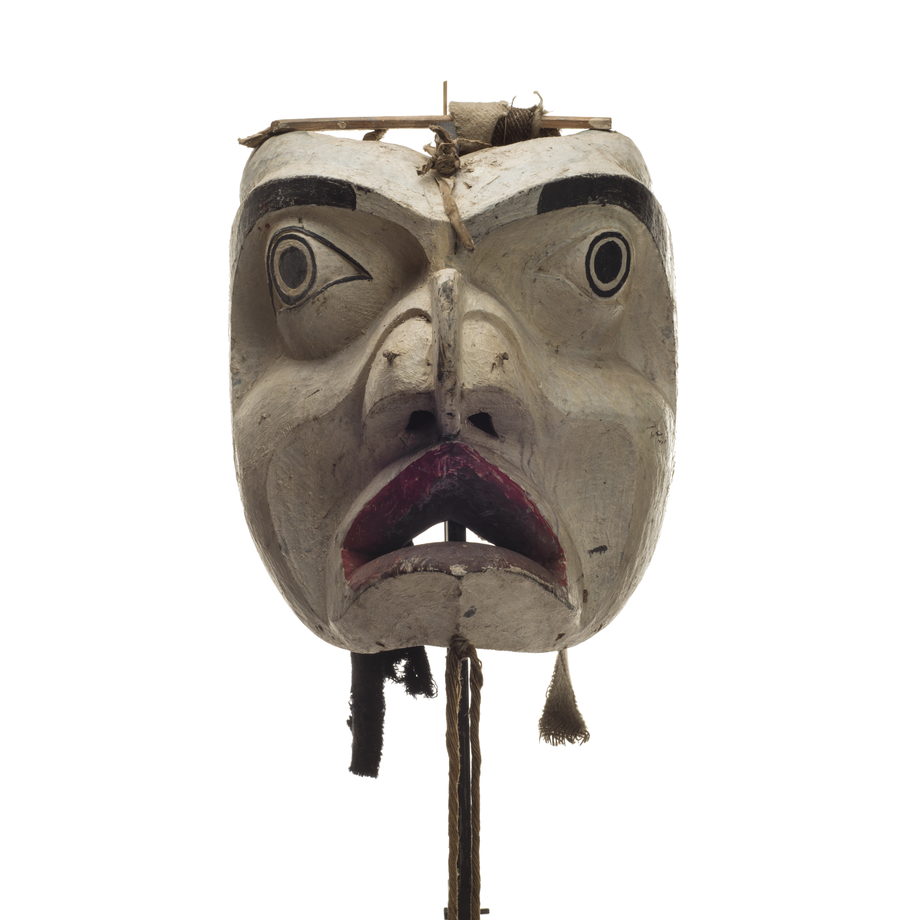 Atłak´ima Mask belonging to Harry Mountain from the Mamalilikala. The large bird mask could possibly represent Daxdaxaluł, the Owl. The mask has ear-like horns on the sides of the top of the head and a hooked beak-like nose. The eyes are somewhat regular in size proportioned to the rest of the mask, but are painted in a way that are large, protruding and piercing. They are brought out by the deeply carved eye sockets. The mask is completely whitewashed and looks as though it has been painted at least twice. The structure of the mask is definitely Atłak´ima. When it was first made, it may have been left the natural wood color and painted later to make the carving stand out. It looks like the horns or ears originally had black designs on them that flowed onto the forehead. The present eyebrows are black as are the irises, pupils and one eyelid. The bridge of the nose and the upper lip have traces of black paint underneath the thick whitewash that would suggest the mask originally had more designs painted on it. The presence of the poorly covered mustache indicates that this character is male. The thick pursed lips that are painted red are an indication of wildness and being from the forest. The mask is large compared to the other masks in the set and must have been an important character requiring its boldness and size. The mask has a stick nailed to the top of it connecting both horns. This could be to support the weight of the big mask along with the strip of Hudson Bay Blanket attached to the center of it. This long strip of white and brown blanket fabric is looped over the bar at the top, hangs down in two strips and is knotted to form a loop. Fragments of bird skin and feathers remain in the cleft between the eye-brows. A long piece of rope is attached to a nail in the chin. Strips of fabric remain tied to nails in the V of the forehead, on the back, and on the bar at the left. A large piece of black rubberized fabric is nailed to the back and forms a harness to fit over the wearer’s head. This harness is adjusted by means of a strip of blue woolen blanket fabric which passes through loops of the same black rubberized material nailed lower down at the back. The bundle of cotton strips nailed to the center of the forehead was probably used to tie cedar bark bundles to indicate this mask’s place in the T´seka ceremonies. It also has two nails hammered into each nostril, the reason for this is unknown, perhaps something was attached to the front of the face and has now been lost. The sight holes are probably through the large nostrils of the mask as many other large face masks are made. The possible Atłak´ima “Owl” mask is very bold and has strong lines that make it a powerful mask that must have stood out when it was used in the great Dance of the Forest Spirits.