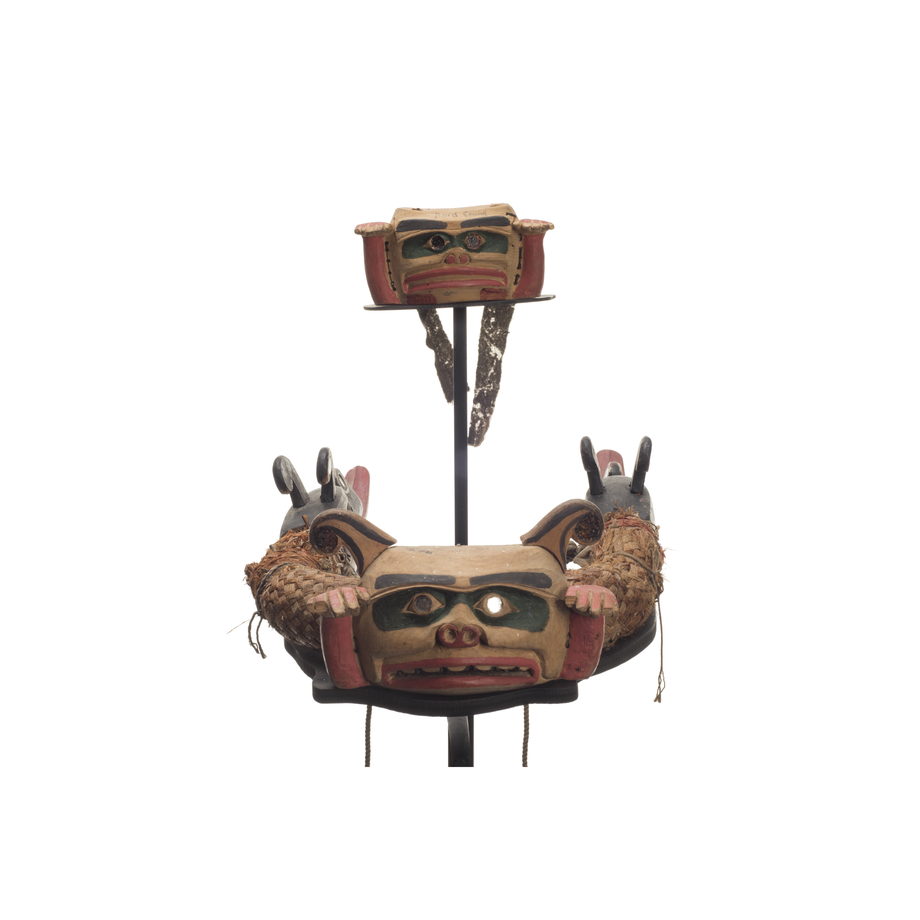 Headdress: Sisiyutł headdress with a central human face with the hands held up along its sides. The inside ring of the headdress is made from a cotton printed material (bearing a green printed checkered pattern) with a strip of pounded and dyed red cedar bark sewn around it. On the back of the cedar bark band is a piece of shredded and dyed red cedar bark, folded to give it some thickness. These three layers are sewn together with white and black thread. On the front of the head ring is a carving made of alder which likely represents the human figure that is central to Sisiyutł designs. The name “Bond Sound” is penciled on the forehead of the carving. The arms of the figure are raised. Usually only the hands are included in this character; this feature makes this carving unique. The carving is sewn with black thread to the head ring through a series of vertical holes between the arms and sides. The eyes were inlaid and were probably set with mirrors like the serpents on the matching belt, but only the pitch resin adhesive remains. The design is painted in red, green and black on an unpainted background and the paint seem to be natural pigment paints, which are much more durable than the commercial paints that were being used in later times. Strips of a woolen blanket are cut and sewn to the ring and hang down on either side to make straps to be tied under the chin. A strip of stiff fabric is folded over itself and is nailed to the back of the carving, probably to make the carving more comfortable when wearing it on the forehead.

Belt: Sisiyutł “Double-Headed Serpent” belt made of three separate pieces of carved alder attached with dyed red woven cedar bark bands. The cedar bark is pounded and woven into rings to make it flexible to wrap around the wearer’s waist. The belt has cotton fishing rope for ties on the inner sides of the back of the serpent’s heads. The eyes on the central face are inlayed with mirrors that are cracked; only small pieces remain. Original pitch resin glue is visible showing the method of setting the mirror inlay. The mouth is carved open and displays large rounded carved-out teeth. Some of the fingers have broken off both hands. The horns on all of the heads are carved separately and added by jointing, nailing and screwing. They are intact and also have mirrors set inside the spirals. The mirrors of the central face horns are missing. “Bond Sound” is faintly written in pencil on the top forehead of the human central face. The identification number “VII.E.466” is written over the name in thicker and darker pencil on the left side of the forehead. The connecting bands of woven cedar bark are worn at the ends where they connect to the serpent's heads. It seems that they were bound with a darker dyed red cedar bark and this could indicate that it is a repair over the original joins. The serpents are carved on both sides and the tongues and heads are connected and made from single pieces of wood. The serpent’s eyes, horns and nostrils are all inlayed with mirrors. The reflection of the firelight during the movement of the dancer must have made this belt magical.