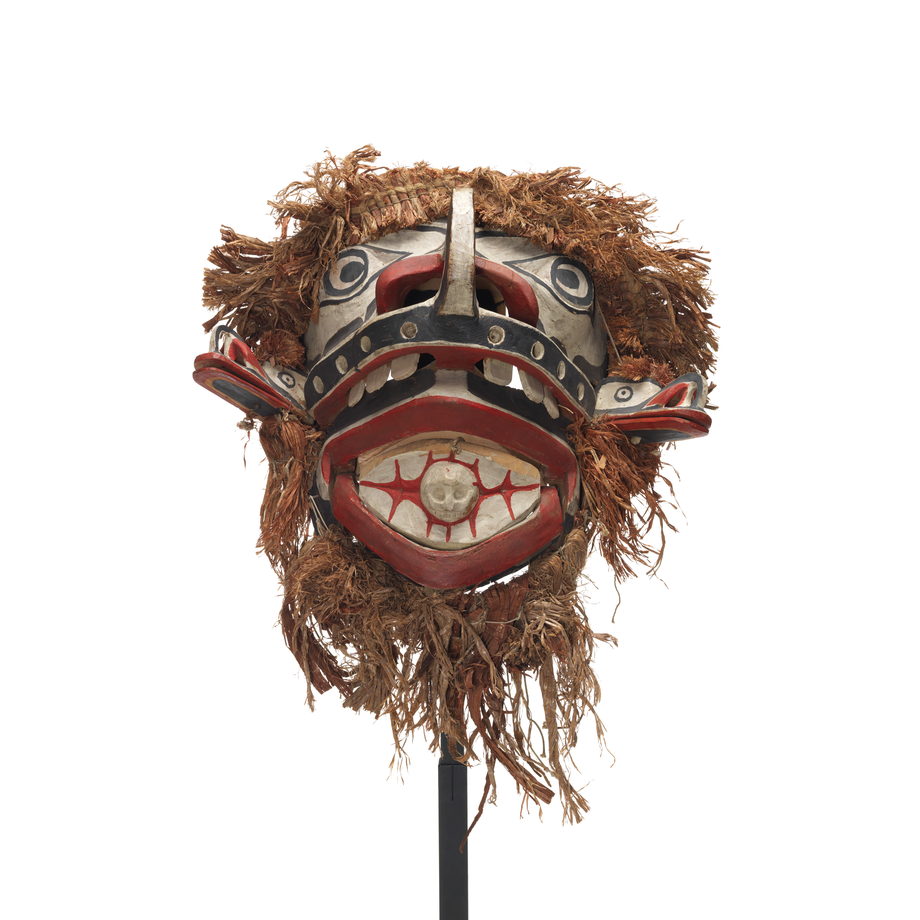 Not much is known about this mask, but, some researchers believe it represents Baxwbakwalanuksiwe’. When Baxwbakwalanuksiwe’ possesses the spirit of a dancer, the dancer becomes a Hamat´sa. The Hamat´sa is the most sacred dance of the Kwakwaka’wakw.

The provenance of this mask is problematic at best. The original owner is identified as Johnny Drabble. In all likelihood it was surrendered to Indian Agent William Halliday in 1922. It does not appear on Halliday's inventory list but does appear in the Halliday/Lord photograph RBCM-PN 12200 being worn by John Drabble. John Drabble’s name appears on the list of items sold by Halliday to George Heye in 1922 for a mask valued at $15.00. In 1926 Heye again returned to Canada on a buying trip. This time there were 13 Kwakwaka’wakw pieces from the "B.E. Angermann Collection". Another of the Potlatch Collection pieces also appears in a Halliday/Lord photo (RBCM-PN 12195). During the repatriation negotiations with the NMAI Smithsonian Institution, it was discovered by their researchers that a separate collection, from a "B. E. Angermann" had been accessioned four years after the Potlatch Collection objects and two of them appeared in the Halliday/Lord photos. These were returned with the first batch of items from the NMAI in 1993.

Large mask with cedar bark surrounding the entire face. The main face has two mouths, one inside the other, both with teeth showing. The inside mouth has lodged between the teeth a smaller face, which appears to be a skull. The eyes of the main face are set far apart and its nose protrudes forward and joins to its upper lip in an arch-like shape. The nostrils flare out on both sides of the nose. A row of holes lines the upper lip and on both sides of the main face are two bird figures representing crooked beaks. Black, white, red.