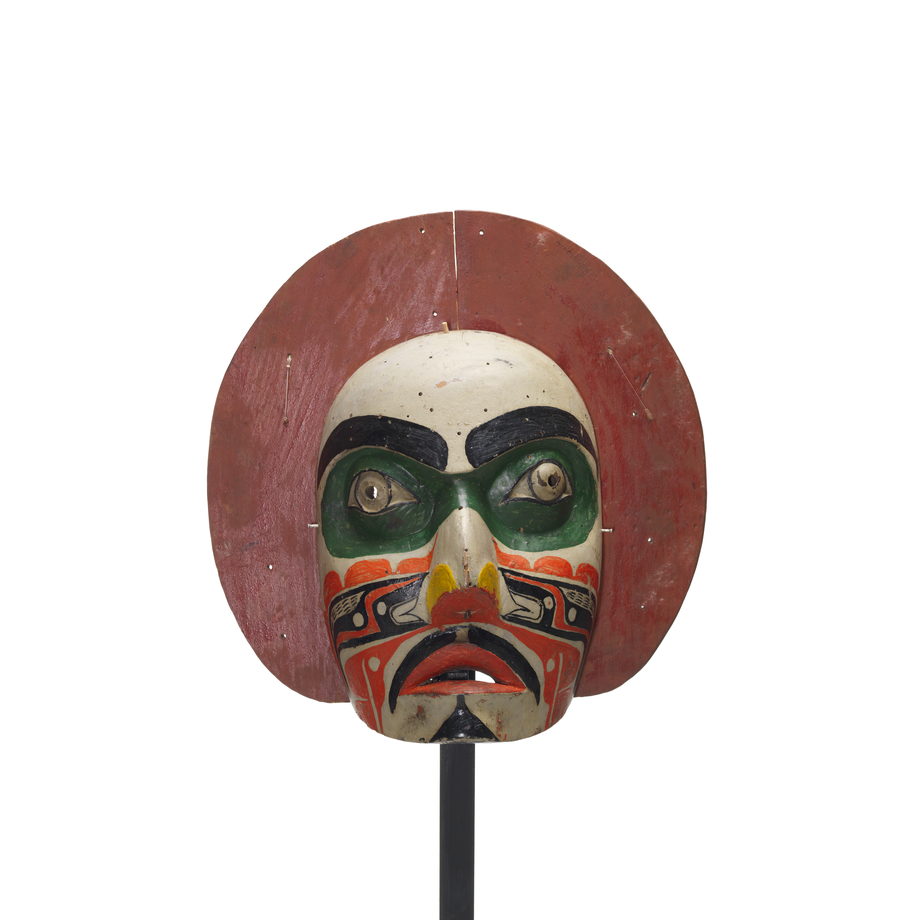 A moon mask can represent one of three different legends during a potlatch. The most sacred way that this mask could appear is as the first ancestor of a ’namima, or extended family group. The two moon masks here (one orange and one blue) look very different because they would have represented different legends.

The Kwakwaka’wakw use the moon in three different contexts. One use is in a story about a time when everything was dry. There was no water anywhere on earth or on the moon except on the northern tip of Vancouver Island where there was a river of water. The moon looked down and thought about how lucky the people were who were camped beside the river. He yelled down and said that he was coming down to have a drink. The people came out of their lodges to see the moon descend closer and closer in slow and swooping movements. He tried to make his final descent, but, was much too big to drink from the stream. The moon, still thirsty, returned to the sky.

The second use is in a ceremony in which the Moon appears in the form of Imas, or the ancestor who comes to acknowledge the family. He enters the house through the front door and moves around the room in slow and swooping motions.

The third use is the dance of the Full Moon that is part of the Tła’sala Peace Dances. The Chief dances, but, he is teased until he runs out the door. He returns as the full moon, entering through the front door and leaving through the back door behind the dance screen.

This moon mask contains a corona of two wood pieces loosely nailed to the back of the mask. Holes in the perimeter of the mask suggest that it may have had attachments at some time.

Carved and painted wooden moon mask composed of a whitewashed, humanoid face and a red corona. The crescent-shaped corona around the face is made from two wood pieces loosely nailed to the back of the mask. Holes on the perimeter of the mask suggest that it may have had attachments. Staple on underside of nose, fishing line attached on both sides of corona, possibly for mounting. White, red, black, green, orange, yellow.