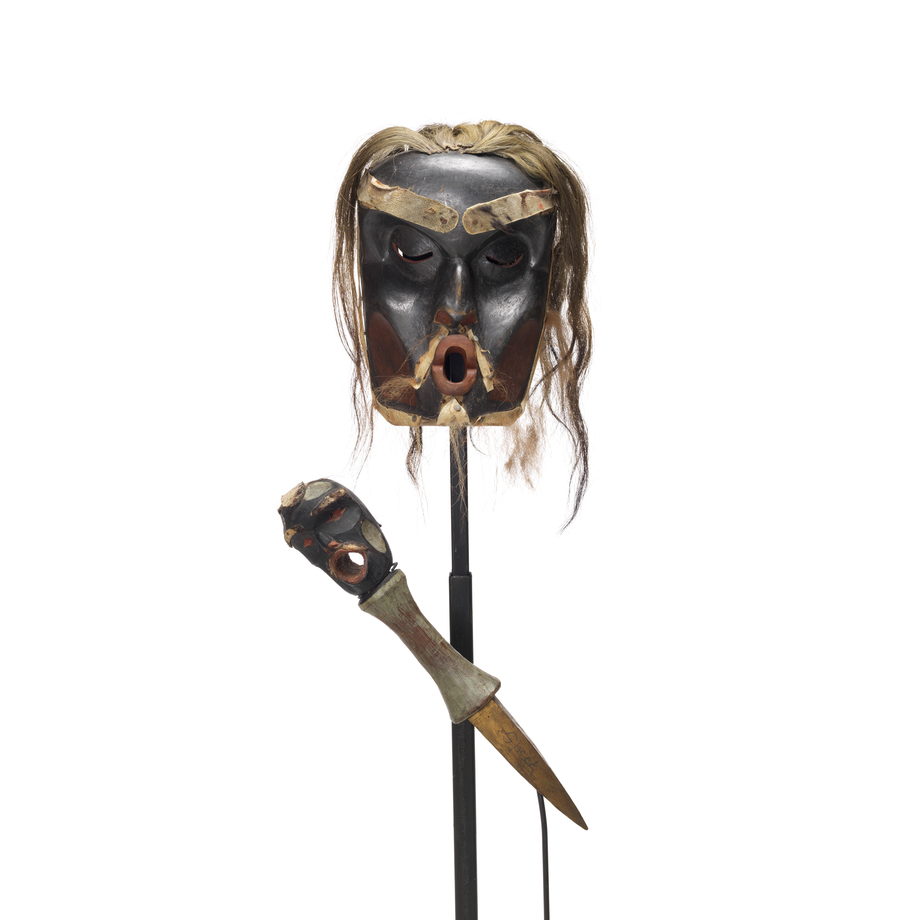 The Gikamł represents a male Dzunuk´wa or Giant of the Forest. There are two types of Dzunuk´wa masks: one for dancing, which is most often female, and another that is not danced, but, presented by Chiefs to indicate their status and wealth. This dagger with a Dzunuk´wa face is a copper breaker, it is used to ceremonially break a copper shield.

Mask: There are two types of Dzunuk´wa masks, one used for dancing, the Dzunuk´wamł, and one used by the Chiefs to indicate their status and wealth, the Gikamł. The Chief's Dzunuk´wa is smaller than the dancing version, just large enough to cover the face. The Gikamł is not danced, rather, it is displayed at the end of a potlatch to signify great status. A chief may display the mask at the end of the potlatch when his wealth, family history and prerogatives are being summarized, or in association with a final display of his copper. It is emphasized that the Gikamł could not be used by a young chief. In fact, a chief must be well established to use such a mask and must have hosted at least four potlatches.

Breaker: In earlier times, breaking a copper was the most formidable challenge that could be made by an owner to a rival, who then must break one of equal or larger value. A rival who could not respond appropriately faced humiliation before the community. The breaking of the copper was accomplished by using a ceremonial weapon or club to knock the pieces off the copper. The male Dzunuk´wa is the creature depicted on the Gikamł - Chief’s Dzunuk´wa Mask and on daggers to be used on occasions when Chiefs are breaking copper, likening themselves to the feared and respected giants of the forest called Dzunuk´wa. The sections of the copper to be broken off were incised beforehand with a chisel and hammer so that when struck with the club, they would break off easily. During a potlatch, a dancer would brandish the copper in a menacing manner and the broken pieces might be given to a rival Chief or destroyed by putting them in the fire or throwing them into the ocean. Today, the breaking of coppers is not permitted within the ceremonial Big House at Alert Bay, because it is considered an extremely hostile act equal to wishing the death of a rival.

Mask: Dzunuk´wa mask with strips of hide nailed on to form eyebrows, moustache and beard. Long strips were also nailed around the sides of the mask. Several small pieces of horse hair are nailed to the top of the head, the long hair flowing down the back and sides. The mask is painted overall with graphite black and red. There is also some unusual painting on the back of the mask, in the region of the eyes and the brass repairs.

Breaker: Wooden dagger, in the form of a stone “slave killer” with an extended four-sided “blade” tapering to a fine point. The handle is reminiscent of a flat-top stone maul; the pommel is carved in the form of a Dzunuk´wa face. The face is painted black, with cheek hollows painted grey/green and two hollows on forehead painted in the same colour. Head hair, eyebrows and moustache are made of black bear pelt tacked on (most of the fur is missing, leaving only the skin). The handle is painted grey-green; the “blade” is painted gold, with the name “Speck” written on it.